February 14, 2019
Spiral galaxies could be transient, nonequilibrium structures originating from the collapse of clouds of matter interacting solely through self-gravity.   (see https://physics.aps.org/synopsis-for/10.1103/PhysRevE.99.022125)

END_OF_DOCUMENT_TOKEN_TO_BE_REPLACED

Here is a gif animated of a simulation with 1 million particles. The initial condition was an isolated, uniform,  prolate ellipsoid with a some rigid rotation. The system is evolved for 50 dynamical times. This is a projection on the XY plane where rotation is around the Z axis. The color code is proportional to the log of the density.

END_OF_DOCUMENT_TOKEN_TO_BE_REPLACED 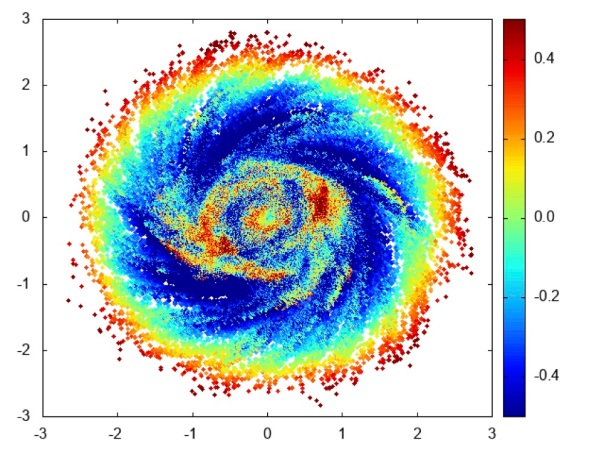 We measure the mean Galactocentric radial component of the velocity of stars (vR) in the disk at 8 kpc<R<28 kpc in the direction of the anticenter. For this, we use the Apache Point Galactic Evolution Experiment (APOGEE). Furthermore, we compare the result with HI maps along the same line of sight. We find an increase in positive (expansion) vR at R≈9−13 kpc, reaching a maximum of ≈6 km/s, and a decrease at large values of R reaching a negative (contraction) value of ≈−10 km/s for R>17 kpc. Negative velocities are also observed in 21 cm HI maps, possibly dominated by local gas emission. Among the possible dynamical causes for these non-zero vR, factors such as the effect of the Galactic bar, streams, or mergers do not seem appropriate to explain our observations. An explanation might be the gravitational attraction of overdensities in a spiral arm. As a matter of fact, we see a change of regime from positive to negative velocities around R≈15 kpc, in the position where we cross the Outer spiral arm in the anticenter. The mass in spiral arms necessary to produce these velocities would be about 3\% of the mass of the disk, consistent with our knowledge of the spiral arms. Another scenario that we explore is a simple class of out-of-equilibrium systems in which radial motions are generally created by the monolithic collapse of isolated self-gravitating overdensities. 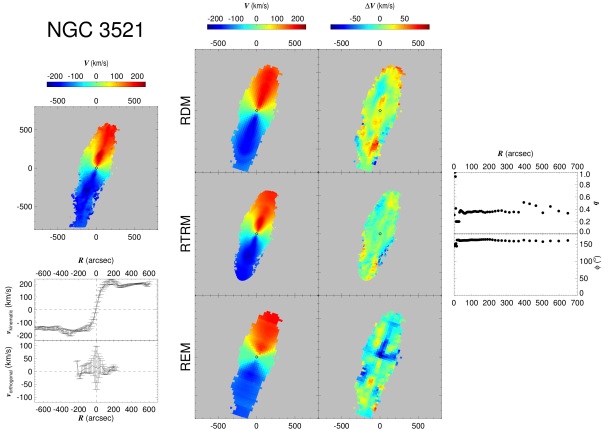 Galaxy velocity maps often show the typical pattern of a rotating disk, consistent with the dynamical model where emitters rotate in circular orbits around the galactic center. The simplest template used to fit these maps consists in the rotating disk model (RDM) where the amplitude of circular velocities is fixed by the observed velocity profile along the kinematic axis. A more sophisticated template is the rotating tilted-ring model (RTRM) that takes into account the presence of warps and allows a radius-dependent orientation of the kinematic axis. In both cases, axisymmetry is assumed and residuals between the observed and the model velocity fields are interpreted as noncircular motions.

END_OF_DOCUMENT_TOKEN_TO_BE_REPLACED 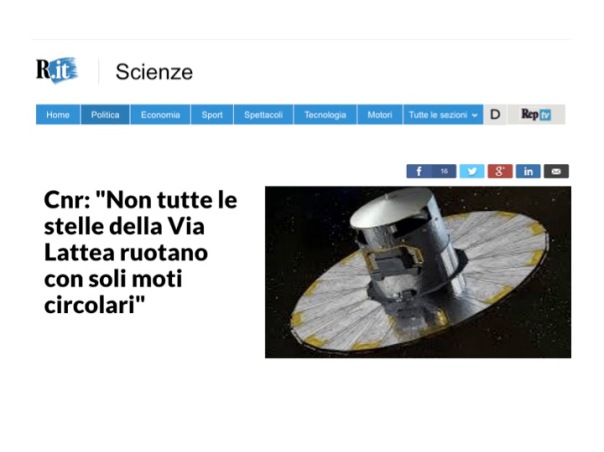