Galaxy redshift surveys represent one of the cornerstones of modern cosmology. In the past decades we have assisted to an exponential growth of the data, which have revealed that galaxies are organized in a large-scale network of filaments and voids. Statistical analysis of these surveys have shown that these structures correspond to power-law correlations.

Below there is a reconstruction of the three dimensional fluctuation field in the SDSS survey. A larger scale structure, the Great Wall in this case, appears as a mountain chain, i.e  a spatially extended structure.

Whether or not, on larger scales, correlations decay and the distribution crossovers to uniformity, is still matter of considerable debate. The principal questions concern indeed the nature of galaxy structures, the type of correlations and their spatial extension and the statistical properties of fluctuations distribution. The clarification of these points is crucial for the testing of cosmological models of structure formation.  There is indeed a intense debate in the field stimulated by our results. For instance Steven Weinberg in his book “Cosmology” (2008) Oxford University, at pg.1 (first sentence) writes 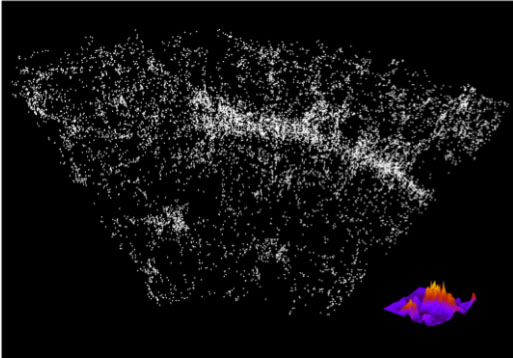