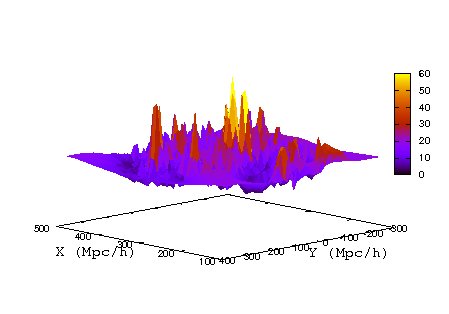 We apply the scale-length method to several three dimensional samples of the Two degree Field Galaxy Redshift Survey. This method allows us to map in a quantitative and powerful way large scale structures in the distribution of galaxies controlling systematic effects. By determining the probability density function of conditional fluctuations we show that large scale structures are quite typical and correspond to large fluctuations in the galaxy density field. We do not find a convergence to homogeneity up to the samples sizes, i.e. ~ 75 Mpc/h. We then measure, at scales r <~ 40 Mpc/h, a well defined and statistically stable power-law behavior of the average number of galaxies in spheres, with fractal dimension D=2.2 +- 0.2. We point out that standard models of structure formation are unable to explain the existence of the large fluctuations in the galaxy density field detected in these samples. This conclusion is reached in two ways: by considering the scale, determined by the linear perturbation analysis of a self-gravitating fluid, below which large fluctuations are expected in standard models and through the determination of statistical properties of mock galaxy catalogs generated from cosmological N-body simulations of the Millenium consortitum.

— here for an higher resolution version —