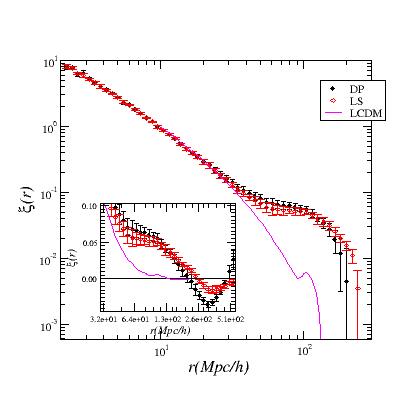 One of the most striking features predicted by standard models of galaxy formation is the presence of anti-correlations in the matter distribution at large enough scales (r>r_c). Simple arguments show that the location of the length-scale r_c, marking the transition from positive to negative correlations, is the same for any class of objects as for the full matter distribution, i.e. it is invariant under biasing. This scale is predicted by models to be at about the same distance of the scale signaling the baryonic acoustic oscillation scale r_{bao}. We test these predictions in the newest SDSS galaxy samples.We find that, in several MG samples, the correlation function remains positive at scales >250 Mpc/h, while in the concordance LCDM it should be negative beyond r_c\approx 120 Mpc/h. In other samples the correlation function becomes negative at scales <50 Mpc/h. To investigate the origin of these differences we consider in detail the propagation of errors on the sample density into the estimation of the correlation function. We conclude that these are important at large enough separations, and that they are responsible for the observed differences between different estimators and for the measured sample to sample variations of the correlation function. We conclude that, in the newest SDSS samples, the large scale behavior of the galaxy correlation function is affected by intrinsic errors andv olume-dependent systematic effects which make the detection of correlations to be only an estimate of a lower limit of their amplitude, spatial extension and statistical errors. We point out that these results represent an important challenge to LCDM models as they largely differ from its predictions.(Abridged version).