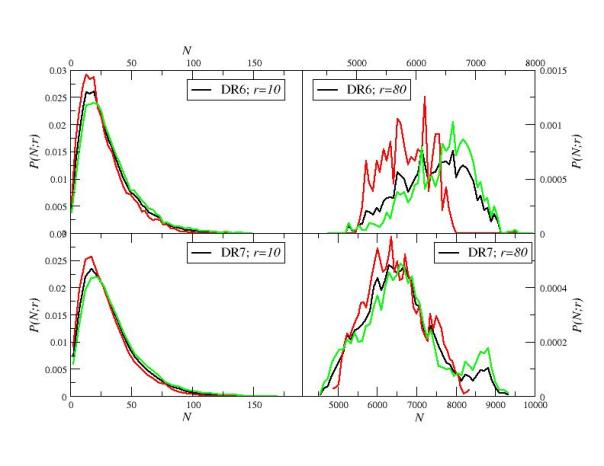 Cosmological density fields are assumed to be translational and rotational invariant, avoiding any special point or direction, thus satisfying the Copernican Principle. A spatially inhomogeneous matter distribution can be compatible with the Copernican Principle but not with the stronger version of it, the Cosmological Principle which requires the additional hypothesis of spatial homogeneity. We establish criteria for testing that a given density field, in a finite sample at low redshifts, is statistically and/or spatially homogeneous. The basic question to be considered is whether a distribution is, at different spatial scales, self-averaging. This can be achieved by studying the probability density function of conditional fluctuations. We find that galaxy structures in the SDSS samples, the largest currently available, are spatially inhomogeneous but statistically homogeneous and isotropic up to ~ 100 Mpc/h. Evidences for the breaking of self-averaging are found up to the largest scales probed by the SDSS data. The comparison between the results obtained in volumes of different size allows us to unambiguously conclude that the lack of elf-averaging is induced by finite-size effects due to long-range correlated fluctuations. We finally discuss the relevance of these results from the point of view of cosmological modeling.