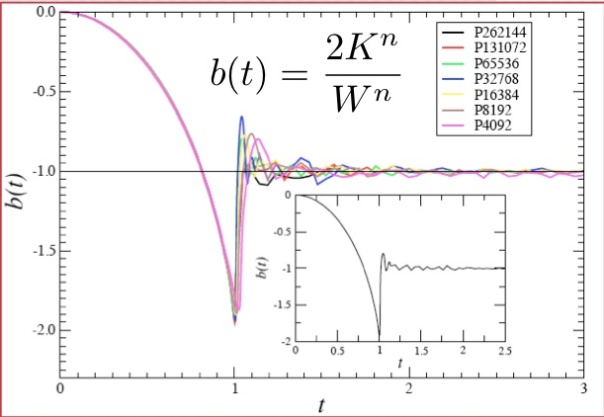 We report results of a study of the Newtonian dynamics of N self-gravitating particles which start in a quasi-uniform spherical configuration, without initial velocities. These initial conditions would lead to a density singularity at the origin at a finite time when N \rightarrow \infty, but this singularity is regulated at any finite N (by the associated density fluctuations). While previous studies have focussed on the behaviour as a function of N of the minimal size reached during the contracting phase, we examine in particular the size and energy of the virialized halo which results. We find the unexpected result that the structure decreases in size as N increases, scaling in proportion to N^{-1/3}, a behaviour which is associated with an ejection of kinetic energy during violent relaxation which grows in proportion to N^{1/3}. This latter scaling may be qualitatively understood, and if it represents the asymptotic behaviour in N implies that this ejected energy is unbounded above. We discuss also tests we have performed which indicate that this ejection is a mean-field phenomenon (i.e. a result of collisionless dynamics).