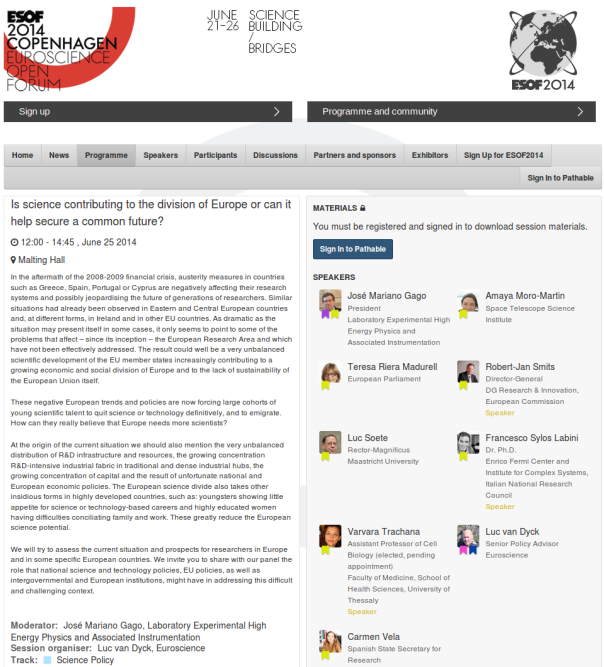 (go to the event web page)

In the aftermath of the 2008-2009 financial crisis, austerity measures in countries such as Greece, Spain, Portugal or Cyprus are negatively affecting their research systems and possibly jeopardising the future of generations of researchers. Similar situations had already been observed in Eastern and Central European countries and, at different forms, in Ireland and in other EU countries. As dramatic as the situation may present itself in some cases, it only seems to point to some of the problems that affect – since its inception – the European Research Area and which have not been effectively addressed. The result could well be a very unbalanced scientific development of the EU member states increasingly contributing to a growing economic and social division of Europe and to the lack of sustainability of the European Union itself.

These negative European trends and policies are now forcing large cohorts of young scientific talent to quit science or technology definitively, and to emigrate. How can they really believe that Europe needs more scientists?

At the origin of the current situation we should also mention the very unbalanced distribution of R&D infrastructure and resources, the growing concentration R&D-intensive industrial fabric in traditional and dense industrial hubs, the growing concentration of capital and the result of unfortunate national and European economic policies. The European science divide also takes other insidious forms in highly developed countries, such as: youngsters showing little appetite for science or technology-based careers and highly educated women having difficulties conciliating family and work. These greatly reduce the European science potential.

We will try to assess the current situation and prospects for researchers in Europe and in some specific European countries. We invite you to share with our panel the role that national science and technology policies, EU policies, as well as intergovernmental and European institutions, might have in addressing this difficult and challenging context.

Talk by FSL: The crisis of Italian university and research systems