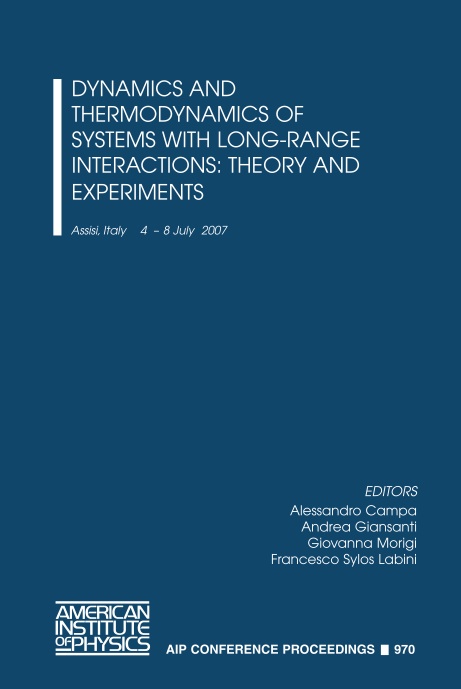 In building a fundamental theory of macroscopic physical systems a primary distinction is to be made between those in which the interactions between the elementary components (e.g. particles or atoms) are short-range or long- range. In the former case every element is affected by only a finite neighbor- hood, while in the latter case the direct coupling to every other element in the system must in general be taken into account. This is the main reason of the complexity in the treatment of long-range interacting systems (LRIS) compared to short-range ones. For instance the framework of equilibrium statistical mechanics, rigorously developed only in the former case, cannot be directly extended to treat in general the long-range interactions .

The range of application of the concepts of standard equilibrium statis- tical physics is anyway very broad as for all fundamental interactions in na- ture, with the exception of gravity, screening mechanisms usually are present making the interactions effectively short-range. It was in the context of astrophysics that it was first appreciated, over forty years ago, that equilibrium statistical mechanics applied to intrinsically LRIS leads to some very problematic features. Only quite recently other systems with unscreened effective long range interactions, belonging to many different fields, have been considered both from a theoretical and experimental point of view. Some examples include two-dimensional vortexes, neutral and non-neutral plasmas, bacterial populations, defects in solids, etc. When the potential of interac- tion is attractive and unshielded, these systems can spontaneously organize into coherent structures accounting for the diversity of the objects observed in the universe. For example, self-gravitating systems organize into cluster of stars, galaxies, clusters of galaxies. On the other hand, two-dimensional turbulent flows organize into jets (like the gulf stream on the Earth) or large- scale vortexes (like Jupiter great red spot in the Jovian atmosphere). Bio- logical populations (e.g. bacteria, amoebae, endothelial cells) also interact via long-range signals through the phenomenon of chemotaxis. Chemotactic aggregation leads to the spontaneous appearance of patterns like stripes and spots, filaments, vasculature. Although these astrophysical, hydrodynamical and biological systems are physically different, they share a lot of analogies due to the long-range attractive nature of the potential of interaction. From the point of view of statistical physics it has been shown that LRIS generally exhibit new qualitative properties and behaviors: ensemble in-equivalence, negative specific heat, temperature jumps, non-additivity of extensive ther- modynamic quantities, long-time relaxation and formation of out of equilib- rium quasi-stationary states, violation of ergodicity, subtleties in the relation between the fluid (i.e. continuum) picture and the particle (i.e. granular) one, etc. While some progresses have been made recently in understanding each of such phenomena, an overall thermodynamic and statistical framework is, however, still lacking. The dynamics and thermodynamics of LRIS is thus a rich and fascinating topic covering many different fields and systems.